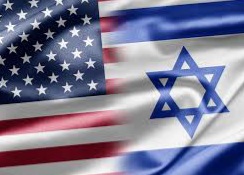 Israel is the largest recepient of US foreign aid with receipts of over $142.3 billion dolllars, according to EveryCSRReport.com  No US administration has ever suspended financial or military aid to Israel.  Even when Israel attacked the US Liberty in international waters killing thirty-four American seamen and wounding 174, aid wasn’t suspended.

According to Reuters, several past US administrations have threatened to suspend aid to Israel, but none have followed thru so far. Former Secretary of State Hillary Clinton talked tough after Israel announced it would approve construction of a Jewish housing project in defiance of a brokered peace deal.  Within a short time Clinton kowtowed, backing off her tough words.  “We have a close, unshakeable bond between the United States and Israel” said Clinton.

US administrations have announced “unshakeable support” to preserve their “cornerstone”,  Israel’s military edge in the middle east.  In 1948 President Harry Truman became the first to recognize the newly-formed  Israel, which was crafted by US foreign policy stategists.

Recently proposed US legislation to supply new weapons to Israel is proof of the US government’s desire to continue its “cornerstone” strategy regardless of the cost.  Trump has said  “I make this promise to you: my administration will always stand with Israel,”  According to MiddleEastEye.net, Senator Kamala Harris also recently pledged her and former Vice-President Biden’s ‘”unwavering support”.