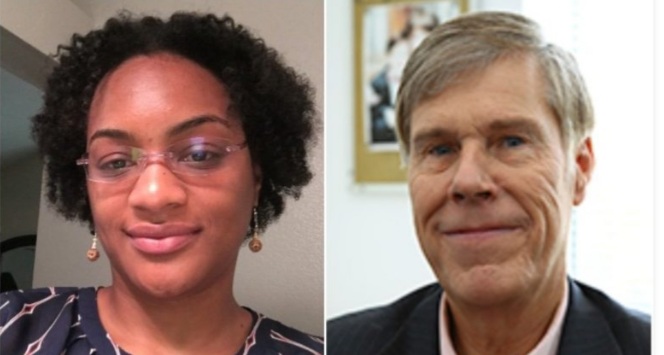 In a recent live streaming Board of Trustee meeting at Cal State East Bay, university professors and students voiced their concern about George Christainsen’s racist views. Christainsen, an economics professor at the university taught racist theories claiming blacks and hispanics were less intelligence than whites or asians.

Dr. Pascale Guiton, an assistant biology professor was among the speakers who voiced her concerns. Christainsen wrote that black women in America are overpaid “relative to their cognitive ability”, according to TheBlackDetour.com.  He floated wild theories that brain size varies along racial lines; and that “people should face issues of eugenics and dysgenics more forthrightly than has recently been the case”, The Sanfrancisco Chronicle reported.

Professors and students voiced concerns about Christainsen’s interview on a white nationalist website which had been flagged as white supremacist ideology. Some speakers questioned the university’s decision to defend Christainsen. A spokesman for Cal State East Bay said  “It is important to note, however, that as a public institution of higher education, we are bound to uphold First Amendment guarantees of free thought and speech”.

The President of Cal State East Bay should prove his University’s sincerity to uphold First Amendment guarantees by welcoming The Honorable Minister Louis Farrakhan and The Nation of Islam leaders on campus to refute Christainsen’s racist theories and viewpoint. There can be no real First Amendment right of free thought and speech as long as black leaders, Islamic leaders, and black nationalists are not welcome to speak at Cal State East Bay, or other universities and college campuses.