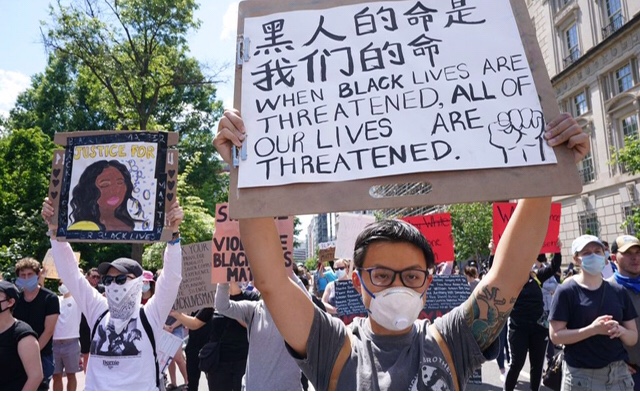 As Asian Americans confront a new wave of Anti-Asian violence sweeping the nation,organizers in both Asian American and Black communities have been quick to denounce divisive rhetoric and call for solidarity. For several months, alliances with other communities of color have been holding rallies and marches fighting against racial injustice. There has been limited to complete media blackout regarding solidarity efforts, while focusing on the violence and its perpetrators. There have even been edited interviews with major media outlets in attempts to push a more divisive narrative.

On March 7, artist and community activist Amina X Lei, AAPI Women Lead organizers Dr. Connie Wun, Jenny Wun, Eddy Zheng of New Breath Foundation and several other Asian and Black activists recently met with NOI Western Regional Representative Abdul Malik Sayid to discuss efforts to improve relations between the Black and Asian community. In an editorial with the Mercury News, Oakland City Council member Carroll Fife writes, “Some may try to pit Black and Asian communities against each other to score political points in efforts to slow down movement to divest in militarized policing.” Meanwhile, Chinatown organizations like CCEDLA make it clear that they do not want more law enforcement or police presence, as they harm communities of color. Alternatively, organizers are establishing self-patrols and escorts for the elderly. “There’s an issue of wanting to amplify Asian American voices, calling out anti-Asian hate and not having to be pit against the Black community.” With the community leaders I have spoken to, we are working to create more conversations between the communities to break cultural barriers, gain understanding, and eradicate generalizations.” Artist and Activist Amina X Lei stated during a recent interview.

One such generalization is the myth of “model minority.” The term was coined by a White sociologist named William Peterson. Petersen used the term in a 1966 New York Times article to describe Asian Americans who as minorities, achieved success despite marginalization. The term alone was used as a tactic to drive a wedge between other minority groups in an effort to erase their belief that they were being discriminated against. This tactic was used less than twenty years after the world witnessed some of the same Asians being held in U.S. internment camps. During the 60’s there was a rise in social activism within disenfranchised communities that identified with the plight of Black Americans. This same consciousness rallied against white supremacy. The concept of Model Minority was used to minimize the role that structural racism and anti-blackness continue to play today.