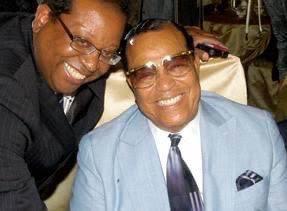 NNV News is back with another monumental edition of “I have a testimony”. Today we interviewed Final Call Editor and Chief Brother Naba’a Muhammad. Brother Naba’a came into the Nation of Islam as Richard 3X, NNV Interviewer asks him to relive the historic moment when he was given his holy name. “Oh Brother that would’ve been February 20th, 2020 during our magnificent Saviors Day Convention in Detroit, I going to try to give you a short version of that story, it actually starts to a degree we were in Los Angeles, this was we had went out after the killing of Nipsey Hussle and we had went out there the Minister eventually spoke at the commemoration for the passing of our brother. So I was blessed to be with The Minister and some of the other student Ministers and he had given to several of the student ministers and he had given to several of the student ministers on the West coast, he had given them Holy Names, and we were in the room we were taking a photo and so the Minister said Okay everybody come get the in the picture and I didn’t get in the picture, he said Brother you don’t want to get in the picture, I said Oh Brother Minister, I thought it was for the Brothers with the Holy Names, so everybody burst into laughter, and the Minister said brother I have a name in mind for you. He said he had a couple basically, so that was really gratifying.” This historic moment is common as The Honorable Minister Farrakhan rewards his helpers for their Brilliant service. As I stated above Brother Naba’a Muhammad is the editor and chief of The Final Newspaper, a paper dedicated to lifting our people with unfiltered and uncompromised truth about the world around them. The Final Call is the greatest Newspaper on our planet and we salute Brother Naba’a for his work and sacrifice.