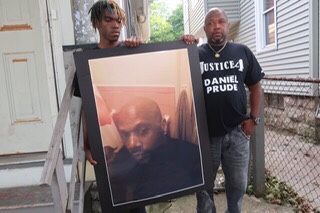 “The criminal justice system has demonstrated an unwillingness to hold law enforcement officers as accountable in the unjustified killing of unarmed African Americans,” New York attorney general Letitia James stated after she announced that a grand jury would not indict 7 Rochester NY police officers that arrested Daniel Prude. On a snowy night last March, 41-year-old Prude bolted out of his brother’s house in what appeared to be a manic episode. His brother made a distress call to the police for help. Bodycam footage that was revealed 6 months after the encounter, shows a naked and agitated Prude being hooded with a device called a “spit sock” then pinned to the pavement headfirst until he stopped breathing. He lost consciousness for two minutes but was revived through chest compressions and CPR by medics. Mr. Prude was placed on life support following that night only to be taken off one week later. Police reports claimed he died of a drug overdose while in police company.

The release of the video footage showing the fatal encounter led to several nights of volatile protests regarding the attempted “cover-up” by the officers. The officers involved in the Prude case will remain on leave pending the outcome of an internal investigation, Interim Police Chief Cynthia Herriott-Sullivan said via Twitter. Herriot-Sullivan replaces former Chief La’ron Singletary after he was fired by the city’s mayor. The Rochester Police department has been under intense scrutiny as criticisms surface regarding allegations of brutality and use of excessive force. The latest of such allegations occurred after officers pepper-sprayed a 9-year-old girl while responding to a family dispute.

Daniel Prude, a Chicago native, and father of five had been staying in Rochester with his brother. Mr. Prude who suffered from acute mental illness had been previously staying at a shelter in nearby Buffalo the day before his brother brought him to Rochester. The case has led to more calls for the elimination of police response to mental health crises, including but not limited to “Daniel’s Law”. The legislation proposed by Senator Samra Brouk, would create a mental health response council that would be sent out a unit of trained mental health workers whenever someone was having a mental health episode. Brouk is hopeful the proposed law gains more traction after the grand jury decision.

The Monroe County medical examiner ruled that Mr. Prude’s death was a homicide caused by “complications of asphyxia in the setting of physical restraint,” the autopsy report also noted that “excited delirium” and acute intoxication by PCP were contributing factors to his death.