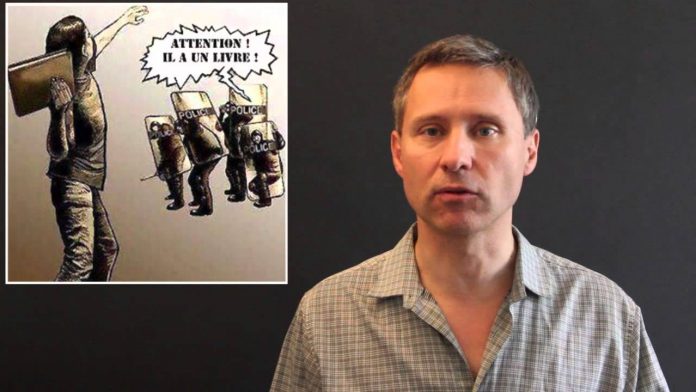 Mr. Herve Ryssen a renowned writer and identarian was jailed recently for his critical views of Jewish people.

“The Unz Review reports, The French identitarian writer and critic of Jewish power Hervé Ryssen was jailed on 18 September after having been found guilty of hate speech on three occasions. He has exhausted his right to appeal. He faces 17 months in jail and potentially more as he has other trials awaiting him.

In June 2018, Ryssen was sentenced to 1 year in jail, the maximum penalty, for a YouTube video entitled “The Jews, Incest, and Hysteria,” in which he explained why, in the judge’s words, “the Jews are an incestuous nation.” Evidently the judge was unmoved by the existence of numerous genetic clinics servicing Jews because of their propensity to various diseases as a historically in-bred population. Ryssen also had to give money to litigious ethnic lobbies, 2000 euros going to the National Bureau of Vigilance Against Anti-Semitism and 1000 euros for Lawyers Without Borders, France-Israel, and the International League Against Racism and Anti-Semitism (LICRA, France’s SPLC).”

Israel’s Billions: Jewish Crooks and International Financiers: How to Pick Money from the Goyim’s Pockets

In January 2020, Ryssen was also found guilty of “contesting the existence of crimes against humanity.”

Ryssen is the author of numerous books on Jewry, with titles like The Jewish Mafia, Israel’s Billions, and The Planetary Hopes. The dissident website Contre-Info wrote:

In a country in which 100,000 jail sentences have not been implemented, even as prisons are being emptied because of COVID-19, they are taking the decision, a political one, to lock up a patriotic writer.

Now Minister Farrakhan has been labeled an Anti-Semite for decades for telling the same truth about Jews today. They deactivated his Twitter, Instagram and Facebook pages last year for so called hate speech.  His Twitter has been restored but his other social media accounts are gone. In his Facebook Ban rally held at Father Michael Pfleger’s Church last year, he boldly said “He’s here to separate the good Jews from the Satanic Jews.” I’m sure they’d love to arrest the Minister, but he remains protected.